From Beneath The Ice 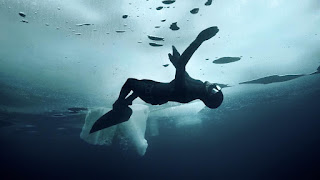 When he was deemed old enough, his father allowed him to tag along on an ice fishing adventure. They woke in the dead of night to navigate the cold wind that kissed the black ice. Through the dead silence he heard a noise that sounded like car skidding to a halt. The ice split and he fell in. Instantly, he felt the piercing of his skin unaware of which way was up, the slightest current capable of putting him further under the ice. In the same moment a similar force pulled him.... his fathers huge hand on the hood of his jacket rescuing him to the safety of the solid ice rim. His jacket was peeled off and replaced by his father's warm coat. Within minutes he would be back in a heated truck. No fish pulled out of the water, no life lessons shared in the shanty, very few words spoken. He never ice fished again.

Through all his life's adventures and accomplishments, this event stuck with him, like images from a silent movie.

As the years went by he used this terrifying experience to explain a few of life's grand lessons:

Wolves Don't Cry
The most outstanding athletic achievement of the last decade was Alex Honnold's scale of El Capitan without a rope. He was thought insane but his decade of preparation tells a different story.

We fear risk taking because of the unknown (if unforeseen) consequence. No one wants to dive into the abyss. Most risk takers are extraordinary planners. Ever hear the one about the guy who told his crew to drill for oil in a spot by tasting the dirt? He'd done extensive environmental testing in the weeks prior but the "dirt test" inspired a far more profound effort from his crew. 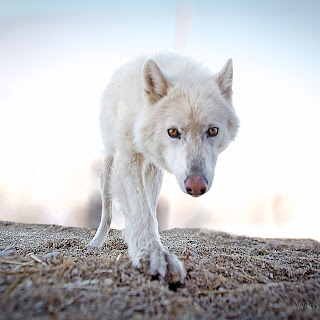 The Hand of the Father
Some of us are able to divine the strength of our father as an unsinkable life raft. There is no fear of the storm with dad at the wheel. But protection gives way to personal freedom and new resources have to be sought.

Whether a gaggle of great friends, a board of trusted advisers or a surrounding team of those who thrive in areas we don't; our confidence is fed through the knowledge that there is someone there to catch us if we fall.

Fruitless Fear of Failure
Rodney Mullen won every contest he competed in with the exception of his last. Oscar De La Hoya was undefeated for most of his career (supposedly only winning his father's love when he finally lost). Brian Wilson spent his life feeding a bully with love unaccepted. They all flew too close the the sun.

Setting goals for perfection is a tough prophesy. Those who learn to fail and course correct tend to embrace adversity with better-intended consequences. 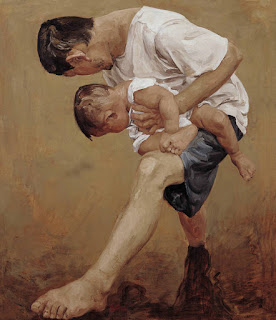 We Can Be Heroes
Entering a new year/decade will cause us to fixate on goal setting. We tend to put a big number on the virtual scoreboard and seek to dream it into reality. While belief will always propel us toward our goal, simply wanting something isn't enough.

We avoid risk taking because it requires a cross-balance of aspiration paired with strategic planning. Some want the trophy without having to put the work in, others work and work without a measurable plan. Is it better to move into each day with unwavering positivity or should we be aware of pitfalls before we face them?

Failure is an affect of planning too big without considering the process. You'll always be disappointed if your goals are out of reach. Learning from failure requires an ability to course correct at each short coming.

We are all fully capable of achieving any big goals that the new decade calls for us to propagate. Every mountain top has a million small steps in it's shadow.

Posted by DavidKovacovich at 8:52 AM